Zombie Dragon is a race of Dragon creature in the Darkness Civilization.

In Episode 2, their names are consisted of the usual title and two rhyming words (e.g. Senjou Enjou).

In Episode 3, creatures with the Oracle or God Nova race are given the title , (Shin Metsu, meaning "True Destroying") as it would not make sense for a god follower or a god itself to be "God Destroying". 真滅 is pronounced in the same way as the original 神滅 title.

Creatures that evolve from Zombie Dragons 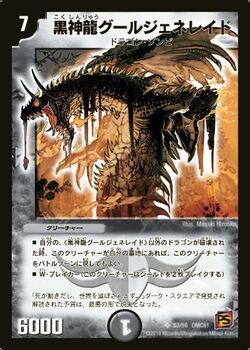 Retrieved from "https://duelmasters.fandom.com/wiki/Zombie_Dragon?oldid=419496"
Community content is available under CC-BY-SA unless otherwise noted.