Zeta is a Name Category of creatures in the Darkness Civilization.

For a card to be considered a Zeta creature, it must have the Z letter with ゼータ (Zeta) katakana above it on a creatures name, written as .

While featuring the Soul Recall ability (as well the Hell and Annihilating variant), most Zeta creatures also have the

They are a high ranking series of Darkness Civilization generals who seek to use the Hyperspatial Zone to conquer the world and kill as many creatures as possible. Their leader is Diabolos Zeta, Annihilation Awakened who was sealed by Storm Kaiser Double Cross, Temporal Kamikaze, but was revived due to cooperation from the Light Civilization which caused him to become Diabolos Zeta, Temporal Ruler, a 5-civilization ruler of the world. This creature is defeated by Last Storm Double Cross, the Super Awakened after a difficult fight of 3 nights and 3 days. However, it was later revealed that they were actually controlled by the Aliens which were in return blackmailed by the Unknown. 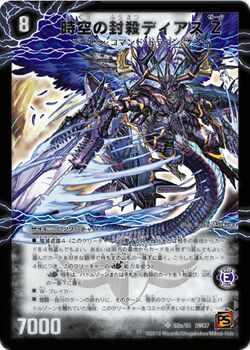