Zero Dragon is a race of creature in the Water and Darkness civilizations.

It is associated with Team Zero.

It is used by Zero Jr.

Like some other Team Zero cards, they are named after large numbers in non-Japanese languages.

They also each feature (Muryōtairyu) meaning "Immeasurably Big Dragon" in their name.

Zero Dragons are affected by all cards that affect Dragons, but there are currently no cards or evolution creatures that specify Zero Dragons. 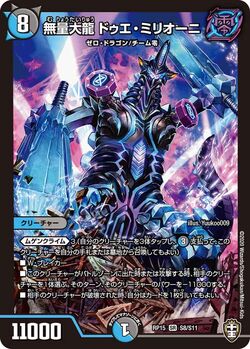