Zenith is a race of creature primarily shared between the Zero and Light civilizations.

A Zenith is a creature that has transcended beyond the five civilizations. Zeniths are creatures born from the thoughts and "wishes" of existing creatures, especially from the Unknown's endless with to reign above all. These thoughts came to life thousands of years ago and the Zeniths were born, starting from Shangri-La, Climax of "Cruelty", who was born around the end of the Divine Evolution Saga and start of the Psychic Shock. The Zeniths wished to start a revolution and turn everything to Zero.

The absolute condition for the birth of a Zenith is the endless loop of opposing factors, such as Lionel's "Ore" in contrast to Light's conviction for the "whole", or Wedding and Suspense's contrast of "Celebration" and "Curse", or in the cases of Hunter Zeniths, the contradiction of becoming Zeniths to defeat Zeniths.

In Episode 3, they are worshipped as Elder Gods by the Oracles and they had inspired their faith to bring peace by zero.

In the background story they are as strong as Forbidden Creatures, despite the Zeniths are crushed easily in the Dragon Saga world before the events of Dragon Saga while Forbidden Creatures are portrayed as extreme ordeals to deal with in the same world after Dragon Saga. This might be due to the possibility that the Dragon's power are severely weakened after the events of Dragon Saga. In other words, if an Episode 2-esque Zenith invasion would take place in Revolution, the entire planet might have been annihilated.

In the Dragon Saga world, the Zenith Temple sits within the depths of Heaven's Gate, and although they tried to emerge in the Dragon Saga world, Owen the Road, Zenith of "The End" and Save the Date, Zenith of "Genesis" were destroyed easily by Dorago the Great, Dragon World, along with the other Zeniths, and the two Zeniths' powers were eventually succeeded by Everlast, Destiny King. True to that name, the card abilities of Everlast's incarnations were partially inherited from Save the Date and Owen the Road, and vice versa in a card design basis.

They have a generally rather high mana cost along with a powerful Come Into Play ability that is triggered when they are summoned into the battle zone (other than Maximum the Max, Zenith of "Military"). This is boosted by Attack Chance of Zenith Symphony, Secret Zenith, where one can be summoned from hand directly upon casting.

All colorless Zenith have 12000 or more power as well as a Breaker keyword such as Triple Breaker or higher (with the exception of Back to the Ore, Zenith of "Ten Tail", who has 11000 power and Double Breaker).

They are often featured with the Unknown race as they are the leaders of the Unknown.

They are also monocolored-Light Civilization as well as multicolored-Zenith creatures later released. 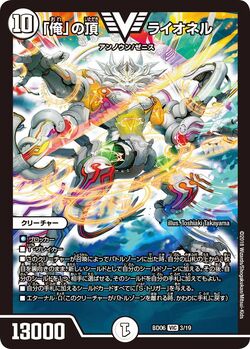