Template:Infobox Archetype Aku and Zen is a family of 2 God creatures.

Due to its civilizations of Water Darkness, Aku is considered to be the "Evil" God while Zen is the "Good" God with the Light Nature civilizations.

After they link together they are known as the "Ultimate Transcendence" (or "Akuzen") and aim to stop the conflict between the Good and Evil forces of the God Apex Saga.

While linked, they are the only God creature to consist of exactly 4 civilizations.

Saga, the Almighty Creator and Saga, God of Destruction were later released both with effects based around unlinking Aku and Zen for a powerful effect.

Despite the fact that the DMC-57 and DM-26/DMX-14 versions of these cards have different illustrations, they are still linkable due to their card names despite the mismatched artwork. This trait is shared with the God Link of Geki and Metsu .

After the resurrection of Ballom in his new Ballom Emperor, Lord of Demons form, the returned gods banded together to fight off the forces of the Darkness Civilization army. These gods included Aku and Zen.

DM-34+1S Cross Generation Plus One Super 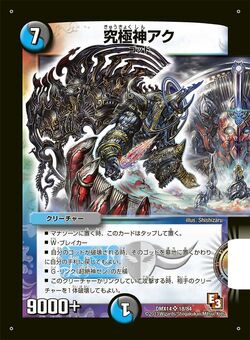 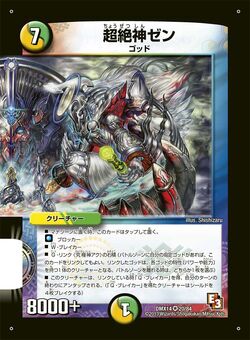