Zakira Fua is an evil duelist and the main antagonist of both Shori and Shobu, and is also the one controlling Yu Fua (his younger sister) from the start of the series.

He is the leader of the Fua Duelists. He is marked as "Z" and ranked as 1st in the organization.

Zakira was born in England (the same nationality as Ash and Oasis). When he was young, he was known as "No. 1". On his 14th birthday, he challenged the Fua Duelist's leader at that time, "Zeus" in a duel. He used Necrodragon Guljeneraid and Supernova Apollonus Dragerion to defeat Zeus and became the cult leader known as "Z".

His dueling mentor is Yaesar, who he backstabs and turns into his right hand man, Yesman. He also took Supernova Apollonus Dragerion for his own use when it was sealed by him.

He later entered university alongside Ash, Oasis and their friends. On his graduation day, his professor asked a question which was known as "The greatest Mathematics mystery". Zakira answered the question correctly and was invited to duel against the professor.

Just like any other member of the Guard, Zakira cannot be physically damaged outside of a duel. He also knows special abilities such as curses and psychokinesis.

Zakira is a very destructive and callous person who would use whatever means to achieve his goals. This includes directly attacking other's beloved in order to do physical damage, brainwashing his enemies into serving him and even destroying the world. He would even go as far as sacrificing one of his high ranking duelist's memory of love just to get Shobu and publicly humilliate Another one after his betrayal and defeat.

On the other hand, he is also very charismatic and some people would devote their life for him, such as Ash, causing him to have the highest amount of followers in any enemy organization built by the hands of man, as well as the most ethnically diverse.

Unlike Benny Haha who only defeats his enemies via despicable means and cheating, Zakira relies on and delights on raw cruelty, skill, cunning and power against his enemies.

His goal is to obtain the "Duel Master's Proof" and use it for his evil means. He has multiple agents working under him, and operates from a large castle. His agents are ranked in terms of increasing power in alphabetical order from A to Z (Z being himself).

An image of Zakira reappears in Katta Kirifuda's time through Basara and the card he uses in the past. However, he only appears as an image of himself in there. This exists as a plot hole since in this timeline, Zakira lost all of his powers and died to Adam in Antarctica.

The area where Duel Masters Land was located is where Zakira had destroyed most of the duelists during Shobu's time (The remains of the first Duel Masters Tourney as seen in Fighting Edge). The card he uses was kept in an ancient seal in the deep underground of the park, in which only the President of the park and Duemouse were able to access. Despite being sealed for years, the dark spirit was able to reach Basara, prompting him to break the seal and obtain the card.

After a chain of events which supposedly led to his demise and Shobu's 'death', an image of Zakira frozen in stone waiting for his revival was inside the base of the tower and remained in one of the destroyed bases in the frigid lands of Antarctica in a frozen state. Basara was guided by the light from Forbidden, which led him to his location. The Zakira image had awaited his arrival, and when Basara arrived, he unfroze and dueled him in order to test his worth of having Forbidden. As the whole area was converted to an actual duel field, the duelists took physical damage if a shield was broken. During the match, The image Zakira stopped Basara's 3 turn kill with a Hell's Scrapper shield trigger. He viewed Basara's Invasion cards (particularly Redzone) and speed based deck as interesting, but he retaliated by using Poppo Juvira, Winged God-destroyer to ease the summoning of Death Phoenix, Avatar of Doom and burn his opponent's shields. Even though Basara managed to summon Forbidden to end the duel in a stalemate, The Zakira image removed the creature from the field with All Delete. This revealed the Forbidden Legend Rare inside the Forbidden. Seeing that Basara's dark desires allowed him to use the card and read the Forbidden Characters, he let Basara have the unsealed version of the said creature before giving him a warning and fading away.

Due to the reemergence of Dokindam X and the image of Zakira responsible for it, Shobu had taken extra measures to prevent Basara and the organization from repeating the same events and to protect Katta, in which he might be aware of the current situation.

Ironically, his presence vanished into thin air after the episode and he was never heard of again.

Zakira is nearly identical to his Charge version before Fighting Edge. However, his Duel against Shobu is different (and Shobu was slightly more capable of fighting back); he uses a Death Phoenix, Avatar of Doom deck instead of the Cross Gear deck he used in Charge, and Shobu broke his right arm with Bolsred Fire Dragon. However, due to him pulling out a last minute Burst Shot, all of Shobu's Fire Birds were destroyed and he was unable to finish him off, causing Death Phoenix to defeat Shobu.

After defeating Shobu and collecting all five Awakening Cards, Zakira re-labels his Fua Duelists as the Guard and starts his operation proper to capture the Duel Masters from their respective countries. He also replaced his lost right arm with a metal prosthetic. The elite members of the Guard also physically step into action and assist in his schemes.

He defeated Toy and sends Rich, Shizuka and Thoth to respectively Spain and Egypt. He attacked India and stole Heavy Death Metal for his own use, then went to Egypt and Spain, capturing Horus and defeating Esmeralda. However, due to physical fatigue from a series of grueling duels all over the world, he took a break to restore his own body in a regenerative tub, giving Dr. Root a window to break in and save Toy, Horus and Esmeralda. He sent Vavelle as retaliation against Root, only for Root to defeat Vavelle.

In the second world tournament he assembles all members of the Guard (Bar Yuu and Xanadu) and announces to the world that he will delete all duelists of the world. White resisted regains his consciousness as Hakuoh, only to be stopped and defeated by Yesman and his defeat is even shown to the public. He then challenges Shobu and used Heavy Death Metal at first; the trio of creatures were supposed to be God cards that will kill anyone who uses them unless they deem their user worthy, but they recognized Zakira as God and bestowed him wings. When they were disassembled, he had his real trump card, Zero Phoenix, Phoenix of Darkness to have Shobu close to losing only to be defeated by his Bolpheus Heaven, Super Holy Dragon and Last Violence combo, a result of his friendship with Hakuoh. Shobu refuses to kill Zakira despite having been very furious against him, having reminded that he will not kill in a duel. Shobu spares Zakira as a result, and the renegade duelist escapes with his ship.

A mission was started in Antarctica along with all of his cult members but was betrayed by Xanadu who is an impostor as the original Xanadu was revealed to have been killed. Nearly all the cult members were dead aside of a few but the few were attacked by Xanadu's cloning ability. He himself dueled Xanadu and defeated it. However, before it dies Xanadu unleashes a destruction ray and Ash blocks the attack with Zakira and Ash receiving massive damage. By this point, all Fua Duelists except for Ash and himself had died.

Zakira's mind was disrupted by Xanadu but he managed to continue his plans. He broke free of the mind disruption and chose to duel Adam. Feeling that his and the cult's freedom have been deprived, he decides to defeat Adam and liberate the cult.

However, he dueled against Adam with a Mad Rock Chester deck and had no way to win against the original gods and Rumble Lecter, Terror Awakened. He lost and was killed along with Ash.

Zakira seemingly died after this duel against Adam and was not seen again. 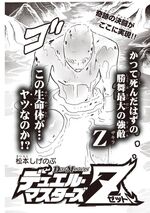 Twelve years after his death, in a side story he was reborn in a new volcano as a new lifeform.

Responding to the Romanov's call, he regained his memories. He then became invincible and was unable to be destroyed by Bolmeteus Steel Dragon's flames. He then sworn revenge against the universe, grew wings and flew into the vastness of space.

Zakira uses a combination of Water, Darkness and Fire cards, but he sometimes uses Light Civilization cards. His deck focuses on the race of Zombie Dragon's with his cards being focused on sending cards to the graveyard.

During this season he used cards from the DMC-19 Zakira's Dragon Commander Deck as well as the DMC-21 Power-Up Pack.

He started to use cards from the DMC-40 Heavy Death Metal deck.

Later in the season he improved his DMC-40 deck by adding cards from the DMC-44 Endless All Delete deck as well as the new Knight creatures.

In his final duel against Shobu he changed his deck to the DMC-46 Arcadias Knights .

He uses a Fire and Darkness deck based around Zombie Dragons and Heavy Death Metal.