World Command is a race of Command creature shared between all of the civilizations.

The race originally featured on only one psychic creature;

It featured all 5 of the different civilizations (Light, Water, Darkness, Fire and Nature).

It was "reincarnated" as a Zero Civilization creature in Rave Diabolos, Holy Damned Festival.

Even later it gained a normal creature version as New Diabolos, Counterattacking Ruler. 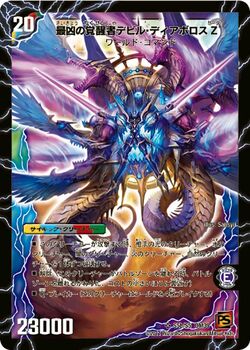 Retrieved from "https://duelmasters.fandom.com/wiki/World_Command?oldid=371581"
Community content is available under CC-BY-SA unless otherwise noted.