Wonder Trick is a race of creature in the Nature Civilization.

Non-evolution creatures have "the Invoked" () at the end of there name.

Evolution creatures have "The Principle Defender" (護法僧) in their name.

They mostly appear to be living objects capturing Beast Folk as seen in Shaman, the Invoked and Hunter, the Invoked's artworks.

Creatures that evolve from Wonder Tricks 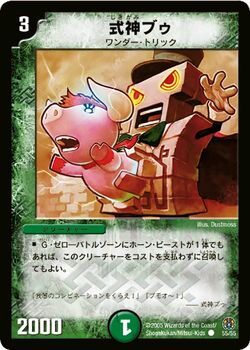 Retrieved from "https://duelmasters.fandom.com/wiki/Wonder_Trick?oldid=419563"
Community content is available under CC-BY-SA unless otherwise noted.