While used at many times over the history of the game, it was popularized in the Duel Masters 2017 block. With the March 1st, 2019 Hall of Fame restrictions, Volg Thunder was restricted to 1. Thus, this deck was severely weakened.

It is a type of Discard deck that has been receiving massive amounts of reinforcements in Revolution Final and Duel Masters 2017. It generally uses masses of random discards such as Jenny, the Suicide Doll and Brain Touch to quickly deplete the opponent's resources in 4 to 5 turns, uses School Man, Demon's Light and Hyperspatial Gallows Hole to remove threats and Onikamas, Strange Flow to halt for no cost rushes, eventually gathering 3 to 4 Psychic Creatures into the battle zone to break all the opponent's shields at once with Last Storm Double Cross, the Super Awakened, or spam Volg Thunders to deck him out.

Defense involves Hyperspatial Gallows Hole/Team Tech's Wave Go!/Miraculous Plague/Demon's Light using Cyberdice Vegas, Gambling Expert of D and Falconer, Lightfang Ninja to stop a lethal direct attack, as well as Upheaval to deplete all of the opponent's resources when a Ramp deck is encountered. There is no mana acceleration, but due to the high amount of Draw and Disruption to the opponent's strategies, it can easily go up to 10 mana in a duel.

However, it is extremely slow and thus rushes can easily take care of it. Onikamas, Strange Flow and masses of discard spells will stop most of them, but it finds dealing with MaltNEXT very difficult due to the easiness to topdeck lethal finishers there and the fact that Onikamas does not stop it for very long.

Although with the March 2018 Hall of Fame update Hyperspatial Gallows Hole had been restricted, there are other removals such as Miraculous Plague that the deck can adapt for Cyberdice's defense, rendering its future in the metagame to be somewhat stable. 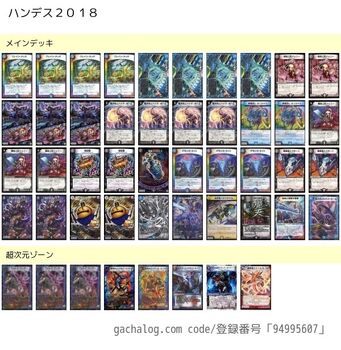 A Water Darkness Discard, latest version as of July, 2018.
Add a photo to this gallery
Retrieved from "https://duelmasters.fandom.com/wiki/Water_Darkness_Discard?oldid=347067"
Community content is available under CC-BY-SA unless otherwise noted.