Victory is a category of creatures featured between the Episode 1 and Dragon Saga blocks, and is featured in the DMR, DMD (DMD-18 and DMD-19 onwards) and DMX series of booster packs.

card rarity are considered to be a Victory cards.

) in place of the mana value symbol on the unawakened Victory Creature's card face, otherwise, the symbol is placed under the awakened creature's race line. Like Super Rare cards, these creatures feature artwork that passes through the card frame.

Each Victory creature is featured heavily throughout the Duel Masters Victory anime season and are used by protagonists and antagonists alike.

The category is discontinued in Revolution, replaced by the much more easily accessible Legend Card.

Cards that support the Victory category 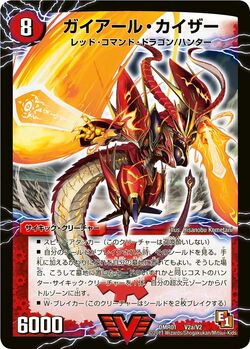