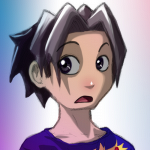 Hi, welcome to Duel Masters Wiki! Thanks for your edit to the Talk:Hunter page.

Can you look over the newer cards in these DMX-06 and DMX-07?

Yeah, I dont have my best scans yet. http://gathe.jp/cardlist_dmx0607.html are the best I have, but the other uploader did also shrink them.

Thanks for explaining Dash TV Tips

Very nice Dash TV tips explained. Well Done!! I am planning to upload more of these videos and hopefully all of them. Still a very nice explanation!! Great Job!!! Saad safa 13:07, April 14, 2012 (UTC)

Glad the Gachinko Judge page caught your interest, as the other abilities (currently Card Mechanics, soon, likely to be Keywords) are bound to be pages too.

I was iffy on the use of "becomes ? more" on the cost increase for Yamata/Intelligence as "becomes" isn't really used in DM at all. (Probably not at all, haven't checked yet).

DM-04 does have some Light/Darkness hate, so maybe we can use templating from Volcano Smog, Deceptive Shade. Yami Michael 13:40, January 17, 2013 (UTC)

Ah! Perfect! I just updated Yamatahead with a guess on templating based on Cocco, and based on your evidence here, it looks like I was on the mark.  I would fix the Gachinko Judge autotemplating, though, to:

Yup, I like what you did to Yamata, so changed Aqua Intelligence 3rd G and the gachinko pages support section.
I'll look into the wording for Gachinko Judge a bit later, but it seems better than the current wording. I already changed Hardcore Judge recently to its proper Gachinko, and I try to be careful when I make big changes like that (or feel the wrath of Facebook messages, haha!).

Over the last year, the wiki changed a LOT. It gained all sorts of archetype pages, finally got all cards actually in the wiki, gave all cards their ocg text (and later on even getting their kana in cardnames) and so on.

I started using Kana a lot more in my translations (Its great to show my work and how I translated!), understanding how its used properly. Since the standard for the keywords is to be written in Katakana, it seemed to fit that I should never have tried to localize it. (Solemn Duty seems to be the exception for keywords, and of course Humanoid is an exception for races.)Yami Michael 15:00, January 17, 2013 (UTC)

There's a few things that point to Tirion being fake... (http://supersolenoid.blog63.fc2.com/blog-entry-3047.html) mainly the fact that it it should be an "a" side if its not awakened, and that we have an image like this so early. The fact we have a psychic creature in E3 is also weird, as well as the 55 cost/110k power. Even with the Infinity Power Attacker recently, it seems like quite a jump.

I already have a translation notice on the card saying details might be inaccurate, but I was likely going to place another sign saying that it might not be a real card and just a fake. Yami Michael 23:57, July 23, 2013 (UTC)

Excellent point about the missing "a" indicator.  The number one thing that is incredibly strange to me is that there're no hiragana or katakana above any of the kanji--why would they in the middle of a block start to change their subtitling policy? Why would they change it ever?  Oh, man, just noticed--the 5s in the manacost are pretttttty pixelated.  I'm looking at my copy of Thunder Tiger, which I happen to have on hand here, but also looked up the more analogous Smith, Breaking Right and the real DM 5 is much smoother, and where the 5 starts to curve right and downward in its semicircle after the top two "strokes," the top of the bump should come a lot closer to the topmost line of the 5, with a shorter neck between the bump and the "hat."  And along the curve it should be smooth, rather than pixelated.  The gap between the curve and the top of the 5 is too long, as is the final upward tick after the conclusion of the round part of the 5 and again, along all these curved areas, there shouldn't be any pixelation, but there's clearly chunks missing in this zenith.  There're even some weird up-flicked spikes faintly at the end of both upward ticks, possibly the result of some less-careful photoshopping. Also, the foil pattern looks off. It doesn't have Supers' DM Dragon logo, which should be super obviously evident in the plain white textbox--plus the overall warpy vibe of the foil isn't consistent with this episode's foils.  Also, what's with the White Zenith Pack border? Why bring it back in the middle of a block?  Anyway, great call being suspicious of this one.  Extremely weird stuff adding up... Je2010 (talk) 03:21, July 24, 2013 (UTC)
As the hours go by, I see it as more and more unlikely that it is real, even though it is quite well done. Yami Michael 04:10, July 24, 2013 (UTC)

Retrieved from "https://duelmasters.fandom.com/wiki/User_talk:Je2010?oldid=254469"
Community content is available under CC-BY-SA unless otherwise noted.