Unknown is a race of creature shared between each of the 5 civilizations.

The names of the Unknowns in Episode 1 all refer to fictitious or real-world espionage personalities.

Unknown creatures originally featured the Kanji of 偽りの名 (Itsuwari no Na), which means "False Name". コードネーム (Kodonemu) is written in katakana above this text, meaning Codename. However, some of them gained Emotions and have 真実の名 (Shinjitsu no Na) in their names, and トゥルーネーム (To~urūnēmu) is written above the text. This applies to all Unknowns who are not Evolution Light Angel Commands, Darkness Angel Commands, Light Demon Commands, King Command Dragons, Evolution Wild Veggies, Evolution Giants or Lunatic Emperors.

The Unknowns are a group of creatures who are formed near the end of the Divine Evolution Saga and are behind the events of the Psychic Shock and Episode 1 and seek to control and conquer all life on the creature planet. One of them, known as Codename Sorge, convinced the alien royal family that the hunters killed their Princess which started the war of the Psychic Shock. It was later revealed that the Princess is in the Fiona Woods and when everything seems settled, Codename Thirteen appears and destroys Pandora Space, the home of the aliens. It was then later killed by Gaial Ore Dragon, the Vainglory which was disintegrated by Codename Sherlock. After then, the unknowns and their leaders, the Zeniths had started their invasion on earth. From it they started to rain Tristones onto creatures and transform them into Unnoises. While they usually have no emotions and are "Codename", later on some of them gained emotions and became "Truename" Unknowns who fight along with the Unknown resistance movements. (With the only exceptions being Darkness Angel Commands and Light Demon Commands, which remained "Codename" for the rest of the block.) In Episode 3 the last surviving Unknown is Gospel, Oracle King who is the final weapon of the Oracles and knows secrets of the Oracles and Outrages.

Mono race Unknowns are tentacled, ominous looking humanoids that have extremely elongated bodies and legs. They tend to have a human-like face which further increases the omminousness. They also do not have tristones on their body.

Multi-race unknowns resemble their non-unknown counterparts which follow Episode 2 themes, but have tristones and parts that are white and cracked with rainbow lines on their bodies.

This race initially only featured only on multicolored cards, save for Codename James. However, they are later featured on cards in all civilizations as well as on Zero Civilization creatures.

All Unknowns have a mana cost of 7 or more. Due to this, they have a race dedicated to helping them, the Unnoise, which mostly consists of lightweight creatures. 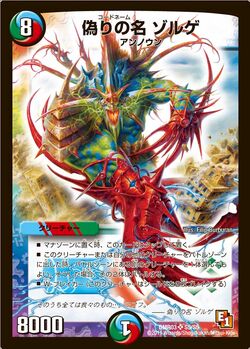