Tyranno Drake is a race of creature shared between the Darkness and Fire civilizations.

They are the descendants of Dragonoids.

They mostly appear as a more or less humanoid dragon-like species. Their larval forms resemble humans with dragon-like features and only those who have the power can take the form of a Dragon-like creature. They are one of the few races of creatures in this game that have a definite female form.

Many of them have ドラグーン (Doragūn) meaning "Dragoon" in their card name.

Creatures that evolve from Tyranno Drakes 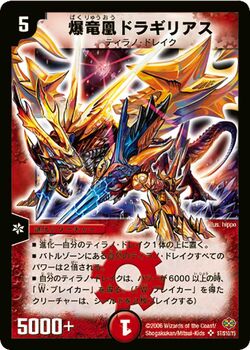