Tristone is a race of creature shared between each of the monocolored civilizations (excluding Water) as well as Zero.

Their names are each written in katakana.

Creatures of various races were corrupted by the Tristone that were created by the Unknown to turn them into Unnoise.

In Episode 3, Tristones started to question their existence as the Zeniths disappeared from the world. As a result, they start to side with the Oracles. Many Tristones in Episode 3 are Vanilla creatures which have extremely long flavor text that tells the background story of Episode 3.

They each feature support for colorless cards. 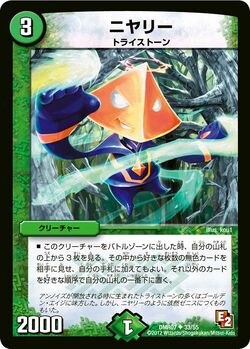 Retrieved from "https://duelmasters.fandom.com/wiki/Tristone?oldid=371571"
Community content is available under CC-BY-SA unless otherwise noted.