Trap is a Name Category of spells primarily in the Nature Civilization.

It was first introduced with Natural Snare (Natural Trap) in DM-01 Base Set. However, it didn't become a category until DMRP-06 Strike Back Galaxy 卍・Inferno・Annihilation!!.

There are a few cards in other civilizations such as Darkness and Fire that exist; Bubble Trap, Trap Commune, Drill Trap and Flame Lance Trap.

Miraculous Truce and Natural Snare were known as Eternal Trap and Natural Trap in Japanese.

Cards that support the Trap category 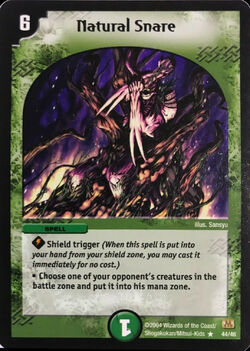 Retrieved from "https://duelmasters.fandom.com/wiki/Trap?oldid=354668"
Community content is available under CC-BY-SA unless otherwise noted.