This page list the various Duel Masters toys and merchandise that have been released in the American and Japanese markets. 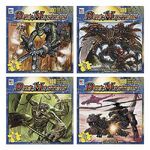 Terrify your opponents with the fierce Bolshack Dragon who comes with electronic lights and sounds to bring the thrilling action of the card game to life. Push the dragons head to wake him. Then call out "Bolshack Dragon", and the beast will announce its presence with a mighty battle roar. Turn his wings, arms and legs to strike battle poses. Twist its body for a destructive claw strike, and watch as lights are activated. A pretend flame projectile really fires from the dragon's mouth. Includes 3 "AAA" batteries. 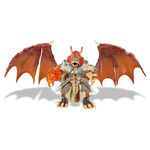 Hasbro Duel Masters Dex Own the zone! Only the cleverest of Kaijudo Duel Masters know of the awesome power you hold in your hands. It will bring you great advantages if you use it wisely. Before entering the Duel Masters arena, bring forth a detailed database of characters, creatures and spell cards! Gain insight into the Civilizations of Fire, Nature, Darkness, Water, and Light! Create fantasy decks and analyze them for strengths and weaknesses! Sort and search for cards, keep track off your most-wanted and super-rare cards. 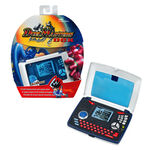 This is the official Duel Masters Card reader released only in Japan on 3 March 2003. The Duel Station can be connected to any screen which have the ports for the provided cables. It comes with an AC/DC adapter as well. The card reader initially only have the data on DM-01 Base Set (OCG) but it have an empty slot to insert a cartridge. 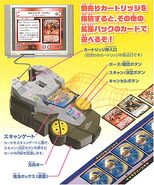 Hasbro's Duel Masters McDonald's Happy Meal Toys include 6 individual toys, which include Shobu action figures, Kokujo action figure, Shobu Assortment figure, and Water, Fire, Darkness, Light, Nature Civilization Card holders. With each of these toys, there are 3 promotional Duel Masters cards. There was a total of 15 different cards released with these toys.

Hasbro's Duel Masters Kid's Meal Toys include 3 individual toys, which include a Shobu action figure, a Shobu card shooter, and a Golden Wing Striker figurine that can be ejected from a green box. They were released alongside 3 Sabrina's Secret Life toys. There was a total of 7 different promotional cards released with these toys, but only the card shooter included one. 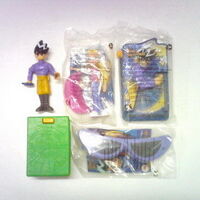 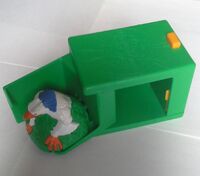 Summon these Duel Masters figures to your battle zone! Recreate the fury of the Duel with the card shooter. Electronic motion activates lights and sounds, rule the duel with the power of a true Kaijudo master. Includes a free booster pack. 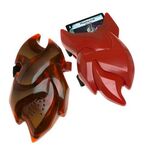 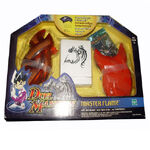 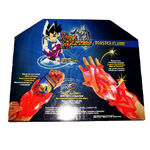 This is the very action figures of Duel Masters Creatures released in Japan in 2005. This collection consists of 5 different figures to be collected: Bronze-Arm Tribe, Bombazar, Dragon of Destiny, Bolmeteus Steel Dragon, Aqua Sniper and Pierr, Psycho Doll.

This is a stand in which you can place your shields. It includes the following.

A gallery for Deck Cases can be found here. 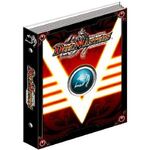 A gallery for card sleeves can be found here.

CoroCoro Limited Playmat (Golden the Johnny and Bullet the Silver)

These stickers were issued with different brands of Nestlé cereals such as Cookie Crisp, Golden Nuggets, Nesquik and Shreddies. They are dated 2005 and sizes are 70x68. There are a total of 10 different creature stickers and 3 mini sticker sheets with creature and character art. Each box offers 2 creature stickers and 1 mini sticker. By removing the sticker, you can reveal the sticker's collection number. The creatures from the same civilizations have the same art behind the sticker, and therefore they share the same collection number.

These collectibles were included in Nesquik cereals.

These are a total of 25 different Duel Masters combining Tazo. Each feature there monster's mana cost, illustrators name, creature's civilization and tazo number. They also feature TV Show characters on them as well.

The back of these Tazos feature the civilization these creatures belong to and if it is a character tazo then they show Duel Masters logo .

These temporary tattoos were released by Star Foods. It is unknown how many different versions exist. 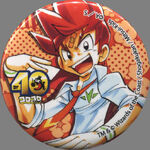 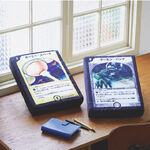 Return of the Survivor Artboard

Board Games
Yahtzee Jr. ● Battle of the Creatures ● Stratego ● Monopoly
Community content is available under CC-BY-SA unless otherwise noted.
Advertisement