Testa Rossa is a Name Category of creatures in the Fire Civilization.

It became a category with the release of Testa Rossa, Last Burning in DMR-11 Ultra Victory Master.

However, in the background story, he was originally an Oracle creature who betrayed them because he wasn't satisfied with the Oracle's strict rules and stagnant behavior, as well as Zorro Star's cruel antics, so he became an Outrage against them. He was friends with Crossfire, Millionaire and Alice, Codebreaker and opposed the outrages, and even became an Exile Creature himself. He also saved Bruce, Dead or Alive from Ultra Knight Punk, Shentury and this had Bruce revive Crossfire as gratitude. However, when "Mastermind" awakened, he was killed instantly along with Crossfire and Alice.

The rarity of the category was steadily increasing from Rare > Very Rare > Super Rare, and was expected to have a victory form, but due to the power of "Mastermind", Crossfire and Alice died in the background story.

He was later revived as Testa Rossa, Drastic by an unknown source when DMX-22 Super Black Box Pack was released, 2 years after the Episode 3 block.

His revival was eventually confirmed in The Rise of Kings block, as Testa Rossa, Survival Star. He defeated Gyukautsu Maguru, Victory Disaster Electrofused King, who was on a rampage due to its ties from the Dragon Orb removed and replaced by Vol-Val-8, Forbidden Dragon King. 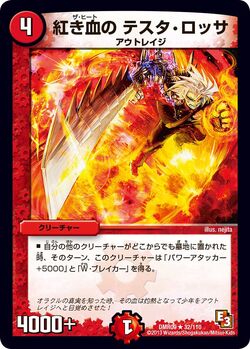