Team Zero is a race of creature in the Water and Darkness civilizations.

This race has an associated keyword, Mugen Climb.

It is paired with Mafi Gang.

It also appears on spells and is used by Zero Jr..

The main illustration motif is kid toys, and bolt-like parts (known as Mugen Bolts) can be seen in the illustrations of creatures that have Mugen Climb.

Many of them also have a 'cracked' appearance.

Just like Darkness Orega Auras, the names of Team Members also tend to have Kanji mixed with Katakana.

Low rarity members of Team Zero that have the Mugen Climb keyword feature meaning Climb at the end of their name.

Other creatures with the Team Zero race but without the Mugen Climb keyword share the same naming as Magic Tools which is based on their mana cost. They also feature meaning Gig at the end of their name.

Higher rarity members of Team Zero have names that are related to incredibly massive numbers, often descending into decillions, or even infinite. For example, Astrochuuno, Nayuta, which in Sanskrit refers to an extremely great number (often said to be 100 million).

There are currently no cards or evolution creatures that specify Team Zero. 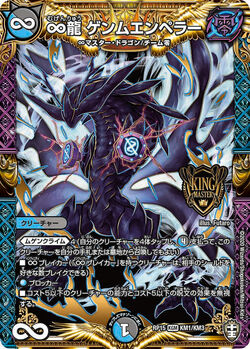