Team Hamukatsu is a race of creature in the Fire and Nature civilizations.

Many of the lower costing creatures of this race (which are Hamsters), feature some form of カツ (Katsu) in its card name, as well as a number, 1, 2 or 3.

It is one of the 5 main Revolutionary teams in the Revolution Final block, with its primary civilization representing Fire.

In Duel Masters Versus Revolution Final, Team Hamukatsu is Katta Kirifuda's main Revolutionary race and the 3 main creatures, who comes in a form of hamsters in their animal form are Katta's creature partners. It was hinted that the team might have relations to Katta's former creature partner Katsudon, with Bosskatsu and Katsuemon being given cards which was meant to help Katta and the team. This was later confirmed as Bosskatsu and Katsuemon were able to instantly recognize him.

The first member of Team Hamukatsu, Bosskatsu arrives with a blank card given by Katsudon and pushed Hamukatsu together with the card. This results in Hamukatsu being fused with the card when Katta accidentally stepped onto him, which gives him an ability to speak and comes in a form as Hamukatsuman, No.1 Wind. During Katta's duel against a member of the Rare Killers, Bosskatsu coming in a form of Bosskatsu, Man 2 slipped into the deck before being shuffled. He eventually helps Katta and Hamukatsu secure their first win. Bosskatsu prepares another creature Briking, Deluxe as a new Revolution Change card for the tough battles to come. The team got defeated by Basara and a powered up Dokindam X in an attempt to stop their plans of destroying the creature world.

The third member of the team, Katsuemon was mentioned when they resolve to save Dogiragon's soul from the Rare Killers and Dokindam X. He was trying to find his comrades and Katta to deliver a card for them but fainted from exhaustion on his way. He was brought to Katta by Duemouse and delivers an armor card in which he received from Katsudon. The team manages to defeat Ijiwaru and retrieves Dogiragon. Katsuemon fuses the armor card with Dogiragon, evolving it to Dogiragon Buster, Blue Leader. The battle eventually completes the team and gaining the first Final Revolution card.

Team Hamukatsu was used in the "4 Stage Revolution Change" chain, with Dogiragon as the final creature in the chain. Bosskatsu trains himself and evolves into Bosskatsu Buster, No.2 Man. With his stronger form and speed attacker ability, he is capable of swapping places with Dogiragon at a faster rate. Hamukatsu evolves into Hamukatsuman Buster, No.1 Wind when he was dueling against Acme in a creature event duel.

When Katta obtains a Dogiragon Gacha Figure, Katta uses a new Team Hamukatsu ace, Dogiragon Silver of Fate. Team Hamukatsu helps Katta in assembling the deck for the battle against Basara. They even converse about their thoughts towards him and his decision to battle. However, they were defeated by a mentally insane Basara and a fully evolved Dormageddon X, Forbidden Armageddon. Dragon Ryu in a form of Ryusei the Earth manages to save Katta and escape from Dormageddon X's sub dimension but at a cost of being injured himself.

In order to become even stronger, Katsudon gave Hamukatsu a guide to a city of hamsters. Katta, Team Hamukatsu and his friends managed to enter the city, finally realized that Katsudon was the one who guided them all along. After clearing the misunderstanding between the hamster inhabitants, Team Hamukatsu receive 3 items and the 3 statues of Katsudon lit up, the light sending directly to Dogiragon Buster, changing the dragon's appearance and granting its hidden form as Final Dogiragolden.

In Katta's duel against his hamster counterpart, which was considered as "battling himself", Katta uses Team Hamukatsu's final forms; Bosskatsu and Katsuemon as Bosskatsu Knuckle and Katsuemon Sword, Double Hero and Hamukatsu as Hamukatsuman Ace, Brave 1. He even reveals Dogiragon Buster's hidden form, changing the dragon's appearance and blue armor to the form of Final Dogiragolden. Using its Final Revolution ability, he lockdown his opponent's chances of attacking and scoring a win.

Team Hamukatsu accompanies Katta to the Kirifuda Family Ancestral Lands to learn the truth about Dormageddon X and a way to destroy it. A blank card was given to them by Z Kirifuda, later formed to Team Hamukatsu's Explosion Go!.

Katta and Team Hamukatsu faced their decisive final battle against Basara and Dormageddon X with the fate of Earth on peril. Even though Katta loses all of his shields, he manages to use the Team Spell in good effect to release Hamukatsu from the seal and Dragon Emperor's Emblem to avoid a direct attack. Even though Dogiragolden manages to destroy 4 cores of Dormageddon X, the main core was left and receives a major power up from Dordrain, Final Forbidden Beta. As a last resort, Katta and Team Hamukatsu creates their final trump card, Curry Bread of the Universe with Hamukatsu as the main component and the creature spirits buying time for them to create it. Hamukatsu sacrifices his remaining power to Dogiragolden, raising its power to a whooping 1014000, destroying Dormageddon X permanently.

However, Dormageddon X self-destruct and attempts to take Katta and Team Hamukatsu along with him. Dogiragon sacrifices himself to save the team and Hamukatsu within him. With the threat finally over, Prin Prin congratulates him on his victory and Katsudon reunites with Katta. However, the battle comes at a heavy cost as Katta loses his power to commune and grant the creature spirits human speech. Hamukatsu, Bosskatsu and Katsuemon lost their creature powers and left into the wild as regular hamsters. 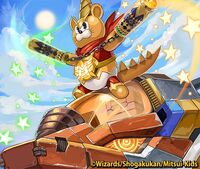 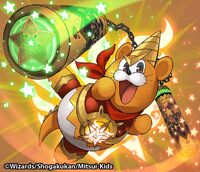 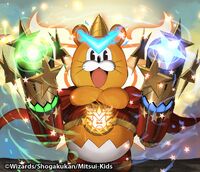 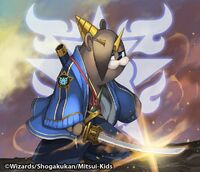 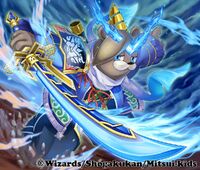 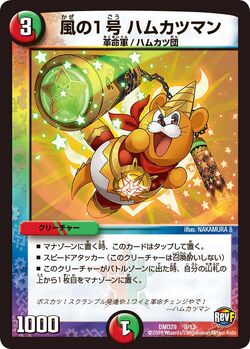