View source
watch 04:03
Wiki Targeted (Games)
Do you like this video?
Play Sound

Team Doremi is a race of creature in the Light and Water civilizations.

They are named after the Solfège, a method used to teach pitch and singing Western music. Syllables are assigned to the notes of each scale. This includes do, re, mi, fa, so(l), la, and ti (or si).

It is one of the 5 main Revolutionary teams in the Revolution Final block, with its primary civilization representing Light.

They have multiple spells themed after Miradante and its time abilities, which prevent your opponent from casting specific actions. These include;

Team Doremi is Lucifer and Lulu Takigawa's main Revolutionary race in the Versus Revolution Final season of the anime. Their main creature partner is Doremi.

Doremi was affected by Katta Kirifuda's "Victory Mode" when he was a card as Doremi, Time 1, giving him a physical form. He and Lucifer later appears to meet up with Katta and the hamsters from Team Hamukatsu. Doremi teams up with Lulu during the time he was investigating Utsubomi Kazura and her partner Acme.

During the Rare Killers assault in Katta's school, Lucifer reveals the evolved Team Doremi, with Doremi being Doremi Twelve, Time 1. The team even reveals their Final Revolution creature, Miradante Twelve, Time Pope, with a series of spells to paralyze Basara from conducting any counterattacking moves. However, it was lost to the Rare Killers in a duel against Number 2. It was later retrieved by Doremi when Utsubomi Kazura used it to blackmail Lulu and Lucifer hit her hand with a rose to startle her. 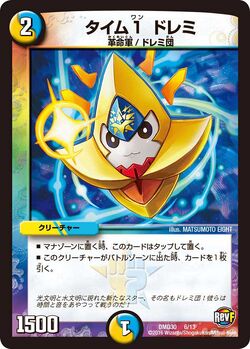