Team Damama is a race of creature in the Light and Nature civilizations.

It is one of the 5 main Revolutionary teams in the Revolution Final block, with its primary civilization representing Nature.

Their strategy involves mana acceleration and manipulating the mana zone.

Team Damama is Leo Hyakujuu's main Revolutionary race in the Versus Revolution Final season of the anime. His creature partner is Damama.

The team was introduced during the time Leo was first admitted to Katta's school during the Student Council President rally. The creatures were the first to introduce Final Revolution.

Wekapipo, Tatu
Add a photo to this gallery 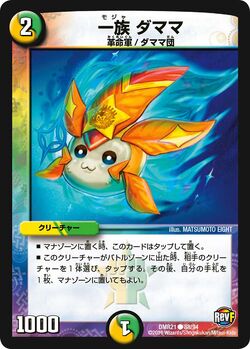