Team Acme is a race of creature in the Darkness and Fire civilizations.

It is one of the 5 main Revolutionary teams in the Revolution Final block, with its primary civilization representing Darkness.

Their strategy is based on suicide tactics, such as discarding and destroying one's own creatures for an advantage. However, if they are combined with Revolution Change, that may keep the hand from depleting. Due to their civilizations and graving tactics, they are suited for Romanov Sign strategies.

Their medium-sized creatures feature the Demon Dragon race while the higher costing ones are Demon Command Dragons.

Team Acme was part of the Brave Three alliance alongside Team Doremi and Team Tech. Both Doremi Redo and Evil Heat tried to warn Miracle Star not to trust Demonkazura too much.

Many flavor texts in DMR-21 say that Team Acme cannot be trusted and A Zarashi's flavor text even says that the team "Loves scheming and betrayal", suggesting that they may turn traitor later on.

Team Acme is Utsubomi Kazura's main Revolutionary race in Versus Revolution Final season of the anime. Her creature partner is Acme.

Acme makes his first debut helping Kazura in getting Katta's attention towards her. He was also one of the cards that are affected by the pulses of Katta's "Victory Mode", giving him a physical form.

In Kazura's duel against Lucifer, she uses the Initials Team Acme creatures. 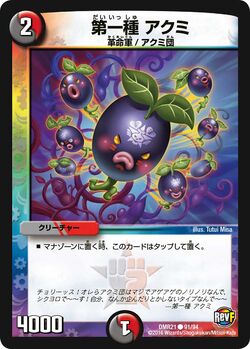