Taiga Akaboshi is the main protagonist of the Haouden Gachi!! manga series.

Taiga is a strong duelist from Geimu Junior High School who will do anything to protect his friends. Due to his knitted half-cap and red hair, Taiga has been called a "Gangsta'" for his thuggish and hip-hop influenced appearance.

His finishing catch phrase is, "Now, to bury everything of yours in darkness."

He may have a slight crush on the GJHSDT's manager, Minto, or he may just really love that she often gives him cookies.

Although he seemingly makes dumb choices during duels at times, he has either tricks up his sleeve, or has enough luck to get the right cards at the right time. 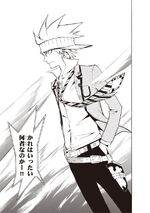 Taiga was once known as the one who ruled at the very top of the dueling world, "Rule of the Beasties" ("The Style of the Beast") and was very confident in his Graveyard tactics.

Taiga defended his friend Soma Buchiyou against the leader of a group of delinquents led by "King Lion" Shishio, defeating the bully in a tournament. Taiga later spends time helping Soma train to become a better duelist.

In Chapter 2, Taiga participated in the Kanto-Kansai Junior High School Duel Tournament in which he played and defeated one of the 7 elite Doumei members, Doumei No.5 Shinyo-Oh.

In Chapter 4, he duels the Korean duelist Yonha I, who stole and burned his deck prior to the match. He won using an impromptu Nature-Fire-Darkness Hunter deck.

In Chapter 5, Taiga goes to London to meet up with his close friend Yuuki and duels Doumei No.3, Juarez Baskerville, defeating him with a Water-Darkness deck with Zero/Fire/Nature touches.

In the final Chapter, he finally duels Yuuki, Doumei No.1, and defeats his friend with a Fire-Darkness-Water deck focused on UK Punk's ability.

He is a founding member of Doumei, though he ranks at No.7. He has left Doumei prior to the start of the story. He treasures his newfound friendship with the Geimu Junior High School Team, and does not want to return to Doumei despite his close friend Yuuki urging him to do so.

He describes Doumei as being "left from his hands", and that Nini, who was there from the start, should be the one who understands that the most, during his duel with him. It implies that Doumei was created because he wants to play Duel Masters for fun, instead of just for winning.

In the Kanto/Kansei Junior High School Duel Tournament, he uses a Darkness and Nature civilization deck.

In his duel with Nini in chapter three, he uses a Fire-Nature-based Alien deck that features the following cards:

In the duel with Yonha, he uses a Hunter deck after his tournament deck was stolen and burned. It contained:

During the duel with Baskerville, he uses a Water and Darkness Unknown Zombie Dragon deck containing the following cards:

In his last duel with Yuuki, he uses a Darkness, Fire and Nature Oracle and Outrage deck with:

Retrieved from "https://duelmasters.fandom.com/wiki/Taiga_Akaboshi?oldid=268241"
Community content is available under CC-BY-SA unless otherwise noted.