Survivor is a race of creature that is shared between all 5 civilizations.

Survivors come from all 5 civilizations, and most of them (excluding Evolution Creatures and Ultra Man) have an ability word designated by the

While they hadn't appeared since DM-06 (with the exception of Ultra Man in DMX-12), they reappeared in the DMD-26 Masters Chronicle Deck: Survivor Evo-Theory α to Ω theme deck. It also featured a new Survivor icon

to replace the previous

The survivors appeared from the earth's core in order to invade and conquer the Duel Masters planet. Due to the harsh conditions inside there, they cooperate with each other regardless of civilization. However, after a cooperative attack by the civilizations, they were quickly defeated and wiped out...

...however, the truth is revealed that the survivors were actually lying dormant in the earth's core. One day, one of the 12 forbidden programs developed by the Water Civilization; the powerful evolution program known as O.V.E.R.Evo was activated by a researcher of the civilization for fun. This has caused the dormant survivors to wake up from their slumber and rampantly evolve while also taking over the researcher who activated them. The angered survivors have now started to take their rampage against the world.

The results of these events are currently unknown.

Due to the nature of Survivors, most Survivors can be considered a supporting and supported card. Only Survivors mentioning other Survivors in their effect are listed here.

Creatures that evolve from Survivors

Creatures that evolve from Survivors: 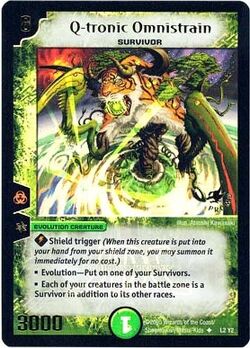