Super Deck Cross is a series of Theme Decks.

A series of Super Decks that were released after Super Deck Zero.

Like the Super Decks released before them, they were based on decks used by characters in the Duel Masters Manga that appeared in the CoroCoro Comic.

Each of the printed cards was a full-frame foil. Each of the illustrations of the cards forms a total illustration image. Each card also has a metal frame.

Many cards that were previously out of print at higher rarities had been printed in these decks.

Various cards in the deck had effects for reducing the cost of high-cost cards or using For No Cost strategies.

A poster image was illustrated on the back of the leaflet included in the decks packaging, with each card in the deck forming the illustration if placed together. This meant that the art on various cards was a Polyptychs image.

Due to the combined illustration detailed above, each deck was exclusively credited to a single artist.

As all cards in the decks were foil processed, some cards may have appeared warped when opened, so attention should be paid to correct these when playing in an official tournament, so they aren't distinguishable from other cards.

In DMC-43 and DMC-44, only the multicolored cards printed the color of civilizations in their cost symbol of the card. However, this was changed for DMC-45 and DMC-46 and was printed on monocolored cards. However, as the symbol representation wasn't displayed as a watermark behind the text, it was slower to quickly recognize the civilization of a card. 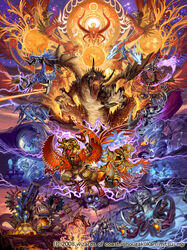 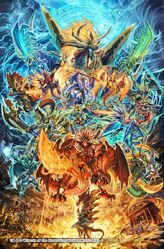