Splash Queen is a race of creature in the Water Civilization.

Their Evolution Creatures have a military rank followed by "Queen" as their name.

They resemble woman-like creatures with a jellyfish-like appearance. Note that just like Hedrians they have no definite gender.

Other Splash Queen races include;

Creatures that evolve from Splash Queens 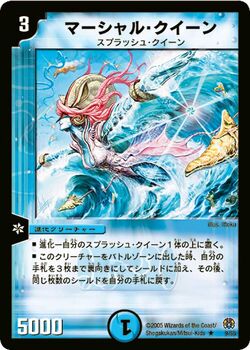 Retrieved from "https://duelmasters.fandom.com/wiki/Splash_Queen?oldid=419469"
Community content is available under CC-BY-SA unless otherwise noted.