Specials is a race of creature that is shared between all civilizations.

Each of the creatures with a Specials race have a designer credit for their artwork. This is displayed under the illustrator credit.

6 of these cards were initially released in DMRP-01, one for each of the main races introduced in the set.

While each of the artworks were redone by a professional artist, each of the original creators were given a "Design" credit on the card.

In the anime, with the exception of Wonder Turtle, Great Labyrinth Turtle which is one of Kira's trumps, Specials can disguise themselves as humans and infiltrate the human world. They do so because the balance of the creature world is collapsing and they want to escape the confines of it.

The Specials that are inside the human world are known as Duel Warriors and are often sent back to the creature world by Duel Masters.

In the Twinpact Series arc, Specials appear as creature spirits themselves without disguising as humans. All of the new specials in the arc save for Amidanazca had interected with Joe Kirifuda in a friendly or semi-friendly way at least once, with Gayoushin being his own creation. 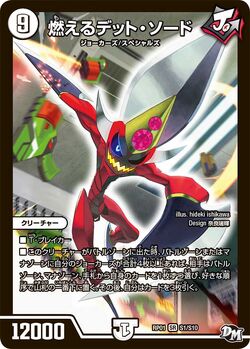