Sonic Command is a race of Command creature in the Fire Civilization and Darkness Civilization, later appearing in the Water Civilization.

They appear as robotic humanoids who are based on motorcycles and are capable of running in sonic speeds. Weaker creatures often ride motorcycles, while stronger creatures seem to be fused with motorcycles.

They seem to be greatly associated with Forbiddens, Initials and Invaders, with all of them having either the Initials and Invader races. This also means that the race might be solely a group of Initials considering how Redzone, Roaring Invasion is an Initials infected with the Invader virus.

They also rarely appeared in the Nature Civilization.

Other Sonic Command races include; 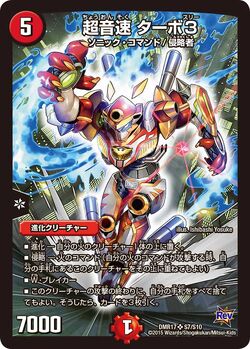