Snow Faerie Kaze is a race of Snow Faerie creature in the Nature Civilization.

They are western-styled faeries that are commonly seen in fairy tales.

While being known as a type of Snow Faerie, There are more male specimens of this race and they usually resemble snowmen or other beings made of ice, such as golems, while others resemble beast folk. 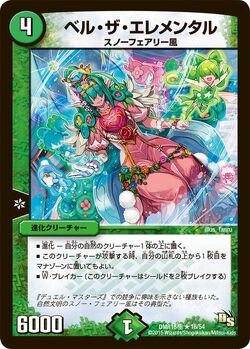 Retrieved from "https://duelmasters.fandom.com/wiki/Snow_Faerie_Kaze?oldid=371550"
Community content is available under CC-BY-SA unless otherwise noted.