Snow Faerie is a race of creature in the Nature Civilization.

Snow Faeries usually feature abilities that support or interact with the mana zone.

Snow Faeries tends to be creatively represented as female, visually and in name, but male Snow Faeries, while rarer, do exist, most notably Hearty Cap'n Polligon. Most Snow Faeries have obscured eyes, usually covered by their hair, a blindfold, a hat, or other garment, but there do exist a very rare few with uncovered eyes, such as Miezou, Dancing Lion Faerie.

Jasmine, Mist Faerie is featured in most artworks of Faerie Life.

They can be found only in snow regions of the Nature world. They are uniquely equipped to fly despite being blind. They have the ability to freeze water, and use ice, snow, cold air, and blizzards to defend themselves.

Creatures that evolve from Snow Faeries 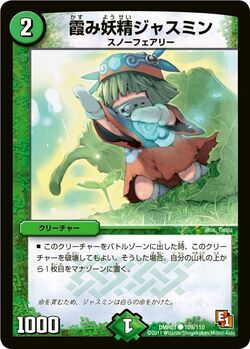 Retrieved from "https://duelmasters.fandom.com/wiki/Snow_Faerie?oldid=340393"
Community content is available under CC-BY-SA unless otherwise noted.