Shori Kirifuda is the husband of Mai Kirifuda, father of Shobu and Katta and grandfather of Joe Kirifuda.

His appearance is based on a taller version of Shobu. From Shigenobu Matsumoto's artwork of Great Earth, he was shown to have grown sideburns, possibility to distinguish him from his son Shobu, who was currently an adult.

In his return in VSRF, Shori was shown to have grayer hair, as the events on Katta's story took place several years since his last appearance.

He helped Shobu to be interested in the game of Duel Masters at a young age. He left his home and family to continue his Kaijudo training, but misses his family every day.

He came back in Season 2 but disappears again. He makes an appearance in the Duel Masters Movie trying to help Shobu, but again disappears.

In Duel Masters Charge he is revealed to have been killed by Zakira using Death Phoenix, Avatar of Doom (in Duel Masters Cross it was Supernova Apollonus Dragerion) in a kaijudo duel while trying to protect the Duel Master's Proof from falling into Zakira's hands.

However, as revealed in Duel Masters Cross, before he was deleted he gave Extreme Bucketman a deck case to pass onto Shobu. It is only later revealed that he wasn't truly dead but deleted, however he managed to break free of his imprisonment and has been reunited with his son.

He was also seen in a flashback with Shobu during the time his second son Katta was born.

After a long absence in the series, he was present in his second son's wedding along with Mai, Shobu and Katsuzo. After the wedding ceremony, he along with the other guests were present when Katta reveals a 3 year old Joe Kirifuda. He was shocked by Kattas revelation of already having a kid at a young age upon the revelation that Joe was Katta and Lulu's son, but took an admiration of his grandson.

His deck is an advanced version of Shobu's, with his trump card being Bolberg Cross Dragon.

He uses cards from DMC-39 Victory Soul and DMC-45 Battle of Yamato Soul. 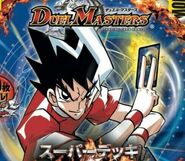 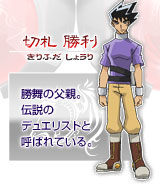 Shobu and Shori in a flashback in Duel Masters Versus

Retrieved from "https://duelmasters.fandom.com/wiki/Shori_Kirifuda?oldid=291357"
Community content is available under CC-BY-SA unless otherwise noted.