She is a member of the Fua Duelists. She is marked as (S) and ranked as 8th in the organization.

She is Rich's girlfriend and his partner. She was sent by Zakira to get Dr. Root but her paths crossed with Shobu and Mimi. She dueled against Shobu in a Kaijudo duel and Rich dueled against Mimi. Shizuka lost her duel Rich won his duel. In the end Rich did not continue and defeat Shobu but he helped Shizuka and took her back to the base. When Zakira was angry and disappointed in her, Rich tried to defend her.

But Zakira gave them another chance on one condition that was that one of them has to sacrifice something precious and she sacrificed their memories of love. Zakira removed the love from her memories. Now she returned but this time she was completely different. She dueled against Shobu in a very weird way as her personality was completely altered by Zakira same like Hakuoh. She dueled using her feet and stood on the table top with her hands, wearing only a one-piece leotard. And this time her dueling tactics were lot brutish then before. After a deadly and brutish Kaijudo duel she lost to Shobu.

She reappeared in Duel Masters World Championship Tournament finals and dueled against Oasis and defeated him. She proved to Shobu and co. that she and Rich are no longer a Fua Duelist. In the end she dueled Xanadu and lost against her.

Much like in the anime, Shizuka was Rich's lover who joined the Fua Cult. Since then, they were totally obsessed in fighting duelists than their love with each other, although Zakira already taken the strongest ones, leaving her with nothing to do.

She went to Spain alongside Rich to hunt down Duel Masters, where they encounter Shobu and Kokujo. Rich deals with Shobu, and Shizuka deals with Kokujo. When she duels, just like in the anime, she stood on her hands and used her feet as her actual Hand and only wears a leotard. Despite having been locked Ballom, Master of Death for a while with an Admiral Queen Lockdown, Kokujo summoned Dorballom and defeated her. She and Rich were then blasted off and were never seen again.

She fought against Kokujo with a Admiral Queen lock deck and lost. 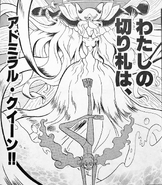 Shizuka dueling in an abnormal body position.
Add a photo to this gallery
Fua Duelists

Retrieved from "https://duelmasters.fandom.com/wiki/Shizuka?oldid=413443"
Community content is available under CC-BY-SA unless otherwise noted.