Shen is a Name Category of creatures in the Zero Civilization.

It is a group of cards that are each Exile Creatures that are Outrage MAX + Oracle creatures (and later Oraclion).

As it requires the シェン in Katakana written above the 神 Kanji, it can't reference cards such as Katsumugen, Climax, even though it has the appropriate Kanji.

While an Exile Creature isn't usually referred to as a category, it has a specific support card with Lance of Tonginus.

It also includes the following Exile Creature from DMX-22 Super Black Box Pack which includes the article in the card name for most other exile creatures Doron Go abilities.

Cards supported by the Shen category 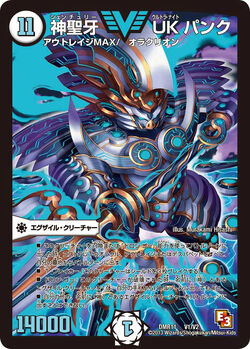