Seal is a keyword action.

The mechanic was introduced in DMR-19 Forbidden Dokindam X, along with the Forbidden Impulses and Forbidden Creature card types that utilize them

These new cards are put into Forbidden Impulses, and when you put the Forbidden Impulse into the Battle Zone, you put a varying amount of cards listed on the impulse from the top of your deck onto the Impulse face down. To flip over the Impulse to the creature side, you have to put all the seals into your graveyard by putting a Command that has the same civilization as the sealed card into the battle zone. Seals are put into the graveyard before the creature's on-play effects trigger.

Certain cards can also allow you to seal your opponent's creatures. Your opponent's creatures are sealed by placing the top card of their deck onto them face down. While an opponent's creature is sealed, the sealed creature isn't treated as a creature, can't leave the battle zone, can't attack, can't block and can't trigger any abilities listed on it and is treated as if the creature wasn't there. The seals can be removed by card removal, by putting commands that have the same civilization as the sealed card into the battle zone or by various card effects such as Liberation of the End.

Seals are the strongest form of Removal in Duel Masters as the creatures don't leave the battle zone and don't trigger leave or Put Into Graveyard abilities, but also denies their existence. However, it is ineffective against decks with huge amounts of Commands as they can easily deny the removal. However, it can still disrupt the opponent's plans by making his key cards unrecoverable, or even deck out the opponent when he has too many creatures in the battle zone.

The CoroCoro Comic issue that revealed Forbidden ~The Sealed X~ had the text for removing seals written in the Forbidden Characters cipher. When decoded into English, it was written as the following;

List of cards that deal with Sealing and Unsealing

Cards that seal your opponent's creatures

Cards that seal your creatures

Cards that specifically remove your seals

Cards that seal themselves with an ability 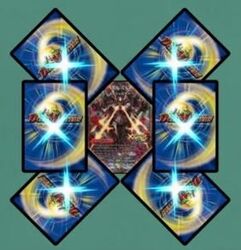 A copy of Forbidden ~The Sealed X~ with 6 seals placed on it.

Sealing an opponents card. The Forbidden Characters for seal (Seal) are displayed on the seal.