S-Rank Invader is a race of Invader creature shared between the Water, Darkness, and Nature civilizations.

Evolution creatures have (S-Rank) as a suffix.

They are exclusive to the evolution creature card type, with the majority having the S-Rank Invasion ability word, similar to normal Invasion but being able to bring them out from an additional zone other than hand.

They are paired with the following races;

They were new invaders that were created by a new S-Rank Invader virus.

S-Rank Invaders are affected by all cards that affect Invaders, but currently there are no cards or evolution creatures that specify S-Rank Invaders. 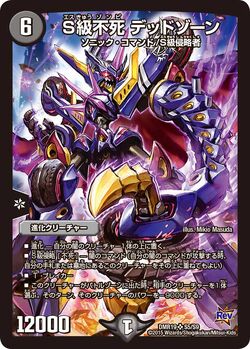 Retrieved from "https://duelmasters.fandom.com/wiki/S-Rank_Invader?oldid=373191"
Community content is available under CC-BY-SA unless otherwise noted.