It speaks in a unique way that it mixes English with the same meaning of the thing it is trying to say in its speeches, as reflected by the Flavor Text of its incarnations and it's incarnate in the anime and manga, Dragon Ryu.

There is a card that has Ryusei in its name from every possible 2-civilization combination with the Fire civilization (LF, WF, DF, NF).

Ryusei Kaiser, the Eternal is originally a warrior who is sent into Pandora Space along with Chan Bell, Channeler of Suns, Aqua Jet, Thunder Blade, Wolf Tiger and Kiryuin Jin, Young Leader in order to investigate the Aliens. However, they soon learnt the truth of the war between the two factions and the princess of the Aliens is lost in the Fiona Woods. Therefore, Ryusei Kaiser, the Eternal became Forever Kaiser, the Meteor and along with the other Hunter warriors tried to protect the Princess. However, after an Alien attack a creature known as Codename Sorge appeared and stabbed Prin in the shoulder, and they realized that there's a Third faction behind the war. Enraged by this, it linked with Ukon Pippi and Sakon Pippi and defeated Sorge.

He returns in Episode 2 as Off Course Kaiser "Dragon" and continues to live after ten thousand years in Episode 3, being in cold sleep along with Prin. There also exists a completely different Outrage in terms of bloodline known as Ryusei, Ex Revolver. In Dragon Saga, another Ryusei, apparently born when the Pandora Space was destroyed, travels to another dimension through the Hyperspace, and corrupts into Ryusei In The Dark and Dead Ryusei, Eternal Demon Dragon after being separated from the Princess.

Later on in Revolution Final, he becomes Emerald Ryusei, the Eternal, and later on transformed into Ryusei the Earth. These Ryusei forms serve Team Hamukatsu. This gives all civilizations paired with fire at least one true Ryusei Card.

This creature is the card form of the Dragon Ryu character. He protects Prin Prin.

Cards supported by the Ryusei category 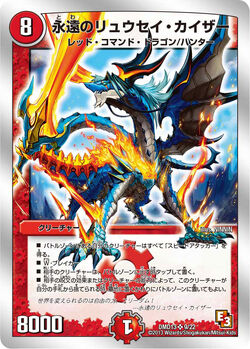