Romanov is a Name Category of creatures in the Darkness Civilization.

They often feature the race of Dark Lord, Knight or Zombie Dragon as well as being part of the "Demonic Eye" group of cards.

Many of the "Romanov" cards feature effects that center around placing cards into a player's graveyard, as well as casting spells from the graveyard.

It is referenced in flavor text that Romanov the 1st, Lord of the Demonic Eye is the ruler of the "Demonic Eye" group, which the "Romanov" family of creatures likely rule over.

The Romanov family is a group of half-Dragon Dark Lords who were born at the peaceful times of Sengoku Saga.

They run a company who produces Spells known as "Magic Shots", and were one of the most active players in the Sengoku tournaments.

In Divine Evolution Saga, they stood up against the Origins and teamed up with the NEX to defeat the Original Gods.

In Psychic Shock, they joined Zeta against NEX and the other civilizations who oppose Zeta and defeated Final Storm Double Cross NEX, the Miracle Awakened with Ballcadeias, Overlord of Demons.

In Episode 1, Romanov the 1st, Lord of the Demonic Eye is reincarnated as a Hunter, Zero Romanov, Darkness GUY.

In Episode 3, Romanov the 1st, Lord of the Demonic Eye is revived by the Oracles as New Order, Demonic Eye Right God.

In Revolution, Romanov the 2nd, Demonic Eye Hierophant was the successor of the 1st.

Cards that support the Romanov category 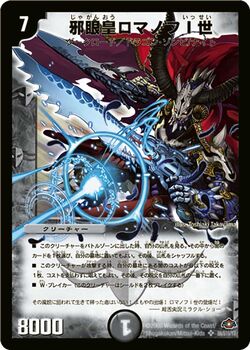