RexStars is a race of creature shared between each of the five civilizations.

Many creatures of this race are based on a combination of formerly-released creatures throughout the games previously made in the 20-year-long history up to 2021.

Various creatures have both a regular creature and evolution form released in the same set.

RexStars are the residents of the current creature world who had entered a pact with former creatures to grant them power to combat the Dispector threat. Creatures who were defeated in Dispector form may grant its resident creature power of the RexStars, as shown in the case of Gaizekial, Concatenated Demon Emperor being reverted into Gaial Kaiser, who transformed Bad Brand into Gagaga Gaial Brand.

In the The Rise of Kings MAX block, the race appears on Tamaseed cards paired with other races.

Like the majority of other creatures in the The Rise of Kings block, they are named after previously released creatures. This can be seen on cards such as Bolshack Momoking NEX, named after Bolshack NEX as well as Momoking or Gelacho (Chitchi Star), named after Baron Gelacho and Baby Zoppe (Chitchi Hoppi)

Star Evolution Creatures are named after 2 creatures, this is usually split as AAAA, (BBBB.Star), whereas AAAA is one creature, and BBBB is another.

They tend to feature abilities that involve evolution.

Creatures that evolve from RexStars creatures 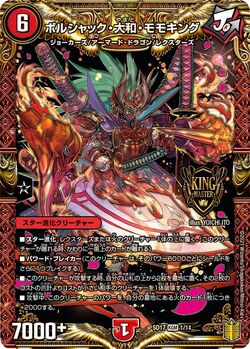