Revolutionary is a race of creature shared between the five monocolored civilizations.

They tend to follow the nomenclature of the non-Revolutionary race; however, they tend to feature (Kakumei) meaning Revolution in their name.

Instead of the usual civilization symbol, Revolutionaries have a fist with a watermark of a star overlaid with a fist behind the effect box in their card frame. This symbol is colored by its corresponding civilization. Revolutionaries that have a Team race (consisting of 2 Allied Civilizations.) have a symbol of both of those civilization's colors.

However, a revolution can be described as "An uprising of the people". As the kings of the civilizations lead this race, this is hardly a revolution in this sense of word.

They are a resistance force defending the Rando nation against the Invaders. Their leaders are Dogiragon, Flaming Revolution, Miracle Star, Lord of Dragon Spirits and Killer the Kill, Demon Dragon King.

The Major revolutionaries are of the Light, Darkness and Fire civilizations.

In the Revolution Final block, the Revolutionaries researched the power of the Invaders and developed their own version of Invasion, Revolution Change. They also formed teams between themselves which were Team Hamukatsu, Team Doremi, Team Damama, Team Tech and Team Acme and now stand against a new threat which is a byproduct of the invasion, Dokindam X and his Initials. The strongest revolutionaries also had Final Revolution which is a very powerful ability that activates upon Revolution change only.

They are the only creatures with the Revolution ability word.

In the Revolution block, they are generally defensive and depended on the number of shields their owner had in exchange for a very powerful effect that reverses the scene in a pinch and are paired with the following races.

In the Revolution Final block, they had a more offensive stance and uses Revolution Change tactics to rush the opponent just like the Invaders and are paired with the following races;

Other Revolutionary races include;

Creatures that evolve from Revolutionaries 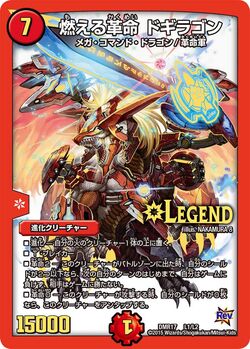