Prin is a Name Category of Hunter / Alien creatures primarily in the Nature Civilization (and its allied civilizations, Light and Water).

She is a popular character among fans of Duel Masters due to her anime-girl like appearance which is rare among creature artwork in Duel Masters at that time.

As other cards that include プリン in their name exist, any cards with the word "プリン" are affected by this category. The following is a list of words that can cause creatures to become "Prin" creatures:

This creature is common supporting character in the TV Series as Prin Prin. She is the daughter of the King and Queen of the Aliens; Alien Father and Mother Alien.

During the events of Duel Masters Victory, she was sent down to earth to be safe from the Alien creatures that make up Gallows Hellish Dragon, Brink of Despair: Gallows, Shachihoko, and Sumo. After Katta defeated Onsen at the end of the series, they managed to revert her to a human form.

After the events of Duel Masters Victory, she currently lives in the forest in a wooden hut with Dragon Ryu, Sakon and Ukon and later appears at the same school as Katta, Yohdel and Bucyake to see their school and other classmates.

Prin is the princess of the alien family and is the daughter of Alien Father and Mother Alien. Unlike most aliens, she is very near human in appearance and is one of the very few creatures with a definite human female form in the series. While her eyes are obscured by her hair at most of the time just like other similar creatures, in the duel masters background story manga her eyes are shown.

She is first found lost in the Fiona Woods and at the moment she is found by the Hunters, she was impaled by Codename Sorge and died. However, after Sorge was defeated her body emitted a mysterious light and healed all of the hunters and aliens and she was revived. However, the Unknown were far from done and another Unknown, Codename Thirteen, unleashed several meteors toward Pandora Space, the home of the aliens and destroyed it. Under rage, she, Gaial and Ryusei fused into the The ultimate psychic creature and defeated thirteen only to be disgenerated by Codename Sherlock. She then was found out to be survived and became Princess Prin, the Curious, which reunited with Ryusei and became Forever Princess, Eternal Ruler. Since then, the two became companions. At the end of Episode 2 she awakened to the power of Zero and aided Kiramaru to break Shangri-La's suppression and thus letting him defeat it. Then she hibernated along with Ryusei in cold ice and awakened after ten thousand years. In return, her age is decreased due to the drawback of suspending in ice. In Episode 3, Prin creatures tend to be Japanese in style instead of the western style in Episode 2 or before. In Dragon Saga and after, she never appeared and what happened to her at that time is unknown.

Cards supported by the Prin category 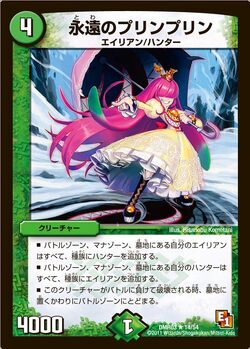 Retrieved from "https://duelmasters.fandom.com/wiki/Prin?oldid=356033"
Community content is available under CC-BY-SA unless otherwise noted.