Phoenix is a race of creature that is shared between all 5 civilizations.

Many of their creatures include (Chōshinsei, meaning "Supernova").

They can also use アステロイド (Asuteroido, meaning "Asteroid") and (Suisei, meaning "Comet") as a prefix.

Due to being creatures with a "Vortex Evolution" ability, most Phoenix creatures also feature the Meteorburn ability as well.

The race is featured on a single spell as a subtype; Phoenix Life.

The artwork border on the Card Frame of Phoenix creatures was in the shape of a phoenix-like crest.

The first type of Phoenix is the regular Phoenix, which is a Vortex Evolution creature that is Multicolored and usually highly powerful. This first appeared on Death Phoenix, Avatar of Doom and Soul Phoenix, Avatar of Unity, which are actually bird-like creatures that are a part of the "Avatars" (In OCG known as "Kings") that attempted to rule the world. This has later been presented on non-avian looking creatures.

The second type of Phoenix is a "Space Phoenix" which is an outer space being that invaded the Duel Masters world that takes various forms, usually surreal-looking. They are named after space objects and have a special artwork border for them which is not present in the new format. They also usually have a Meteorburn ability which makes them difficult to stop or massively powerful. They also seem to have rankings in which the larger ones are called "Supernovas" and smaller ones are called "Asteroids". While thought to be extinct since the Phoenix Saga, they returned in the Sengoku Saga and Divine Evolution Saga.

Ultimate Galaxy Universe is the strongest phoenix which happens to be the universe of Duel Masters itself. While seemingly forgotten by the developers, if the last Phoenix gets released from it, the universe ends. It is unknown if this would become an event of the background story, but if it does it may mean the end of the original Duel Masters series.

Creatures that evolve from Phoenixes: 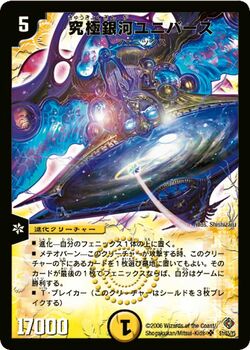