Passion appeared in the Star Cross series of the Manga.

He is the brain of Adam's guards. When he first appeared his upper body is hidden underground and his feet is so huge that Trouble and Terror can sit on top of them.

His brain is an artificially engineered "Triple Brain" and his body can split into 3 bodies, enabling him to duel multiple opponents at once.

He resembles a vaguely human robotic figure wearing a one pieced armor that resembles a dress. When his body splits, one of them has the face of a tough man and the other has a chibi deformed face and both bodies are levitating in the air. When the bodies merge with each other and he enters his triple brain state, his head becomes grotesquely swollen, giving him an alien-like appearance.

He dueled Mimi, Ryoga and Hakuoh with 3 bodies and defeated Mimi and Ryoga. He used his triple brain status to continue battling Hakuoh.

Against Ryoga he used a Light, Water and Nature deck that gathers massive amount of Evolution Creatures such as Fighter Dual Fang, Thunder Moon, the Enlightened and Emperor Neuron and defeated him.

Against Mimi he used a Fire Civilization deck and used Magma Moon, the Enlightened to put Crimson Mega Dragoon into the battle zone which caused all of Mimi's blockers to be destroyed and defeated her.

Against Hakuoh he used a Darkness graveyard evolution deck and used Hades, Emperor of Death and Yata Izuna, Eight-Headed Parasite to bring out Skull Moon, the Enlightened quickly. While he did destroy many of Hakuoh's blockers using Skull Moon's ability by trying to destroy it with Dark Soul Creation, Hakuoh managed to summon Ulpheus, Dragonic Spirit. Uplheus cast Heaven's Gate, putting 2 copies of Diamond Aven, Spirit of Awakening into the battle zone. Passion was then defeated after a mass attack. 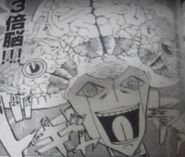 When Triple Brain is activated
Add a photo to this gallery

Retrieved from "https://duelmasters.fandom.com/wiki/Passion?oldid=295901"
Community content is available under CC-BY-SA unless otherwise noted.