Outrage OMG is a race of Outrage creature in the Fire Civilization.

It follows the story of the Outrage MAX exile creature of Katsudon, who has obtained the power of the Rage Crystal and Oracle Jewel in order to battle God Izumo.

This race only appears on one Victory Rare exile creature, Katsumugen, Climax.

Outrage OMG are affected by all cards that affect Outrages, but currently there are no cards or evolution creatures that specify Outrage OMG. 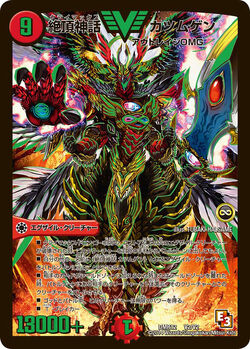