Outrage Nyanko is a race of Outrage creature in the Light Civilization.

It was only featured on one card, Nyannyan, Nyanko Rage.

Outrage Nyankos are affected by all cards that affect Outrages, but currently there are no cards or evolution creatures that specify Outrage Nyankos. 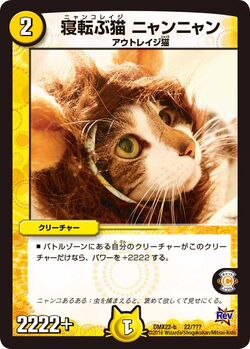 Retrieved from "https://duelmasters.fandom.com/wiki/Outrage_Nyanko?oldid=385054"
Community content is available under CC-BY-SA unless otherwise noted.