Outrage is a race of creature that is shared between all of the civilizations and in the Zero Civilization.

Outrage are named after various sources according to their civilization.

Additionally, their Kanji suffix has a word that isn't the pronunciation of the kanji.

A naming theme for Outrage creatures in the Zero Civilization is unknown as only Smith, Breaking Right exists.

The races of Oracle and Outrage appeared 10,000 years after the events of Episode 2 and war off against each other.

They are a race of creatures that takes various forms, from humans to anthropomorphic animals to dragon-like creatures. They are capable of breaking science and using parts of their bodies as weapons.

They also love infighting if there were no more enemies left for them to fight.

They returned in Revolution as a race that helps both the Revolutionaries and the Invaders, and those are based on past creatures and spells.

They tend to have effects that twist the logic of Duel Masters gameplay such as skipping one's turn, having more than 4 of the same card per deck, and having absurdly high power when attacking, even reaming into Infinity.

Due to this, they are often associated with the term Infinite.

After Episode 3, most of them are of the Fire Civilization.

Other Outrage races include;

Creatures that evolve from Outrages 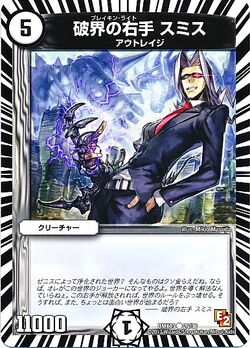 Retrieved from "https://duelmasters.fandom.com/wiki/Outrage?oldid=371519"
Community content is available under CC-BY-SA unless otherwise noted.