Origin is a race of creature that is shared between all 5 civilizations.

Their names are usually based on Japanese myth and lore, such as "Himiko" and "Ikazuchi".

They were the first life that existed on the planet where the Duel Masters universe takes place and slept in an orbit named "Original Heart". After the Galaxy Shot - HELL exploded in the hands of Shiden Galaxy, Super Champ, a time-space rift appeared and these creatures appeared from it and attempted to take over the world.

After the events of the Divine Evolution Saga ended, the surviving Origins drove themselves to extinction. However, a few continue to exist.

Their appearance varies with regular creatures and usually have a unified feature for each civilization.

They focus on aiding evolution creatures and creatures with the God race.

All Origins in DM-31 Greatest Champion have either the Samurai or Knight race.

No creature exists only with the Origin race.

Other Spirit Quartz races include;

Creatures that evolve from Origins 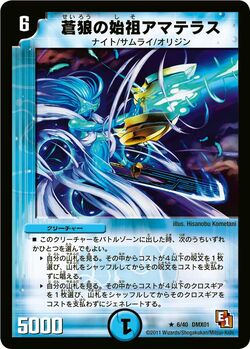