When you use an Orega Aura card from your hand, you may attach them to one of your Gacharange Creatures in the battle zone, or you may Gacharange Summon and then attach it to to the summoned creature.

They are stacked sideways on Gacharange creature cards in a T-shape and the power and abilities of the Orega Aura are added to them.

So far, there are no Orega Auras of the Light, Fire or Jokers civilizations.

In the anime, if they are attached to a Gacharange Creature, they overwrite the creature or any auras before them completely. If a weaker Aura is put on top of a stronger Aura such as when */ Kerblock, Nigen /* is put on top of A Stra Zeele, the weaker aura will appear inside the stronger aura instead of overwriting it.

As of DMRP-09 New Zone Was Born! Super GR and Orega Ora!!, they only exist in the Water and Darkness civilizations. In DMEX-05 100% New Zone! Super GR Pack 100, they were introduced to the Nature civilization.

Unlike other card types with a specific keyword action such as Summon or Cast, Aura utilize the generic term of "use" as a keyword action of putting them into the battle zone.

Non-high rarity cards use */ as a prefix and /* around the rest of the card name.

The amount of power given to the attached creature is based on the prefix of the card name.

These Orega Aura are named after the classes of Mafi Gang.

These Orega Aura seem to combine 2 greek letters to form their names. 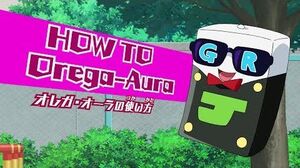 Retrieved from "https://duelmasters.fandom.com/wiki/Orega_Aura?oldid=362125"
Community content is available under CC-BY-SA unless otherwise noted.