Oraclion is a race of creature exclusive to Zero Civilization creatures.

Continuing the musical theme of creature races that appeared throughout Episode 2, as well as the newly introduced God Nova creatures (who are named after bands), they are named after musical genres (specifical subgenres of rock).

So far, these named subgenres often tend to correspond to band names mentioned on other creatures.

Evolution creatures use a variant of "せいきまつ"(Seikimatsu) in front of their names.

They are created by the Oracles using the power of Zero and are worshiped and summoned by them in their war against the Outrages. While worshiped as Gods in Oracle religion, The true gods are God Novas and Oraclions are dropped out of favor. In DMR-09 Episode 3: Rage vs God where the God Novas debuted, there were no Oraclions. A new Oraclion, Shoegazer, Bright Deity would return in The next expansion.

They are used by Zorro Star in Duel Masters Victory V3. However, he doesn't say anything that respects them for they are "false gods" while the true gods are the aforementioned God Novas.

Aside of Trance, Sacred Strange all of them are printed in foil.

Zorro A Star, Mantra's Prison Break is the only Oraclion with a Civilization.

Creatures that evolve from Oraclions 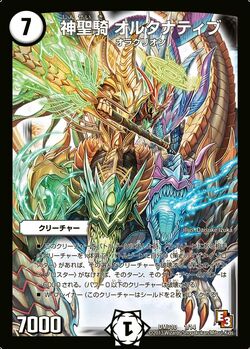 Retrieved from "https://duelmasters.fandom.com/wiki/Oraclion?oldid=371517"
Community content is available under CC-BY-SA unless otherwise noted.