View source
watch 02:23
Wiki Targeted (Games)
Do you like this video?
Play Sound

Oracle is a race of creature shared between each of the 5 civilizations as well as on Zero Civilization cards.

The races of Oracle and Outrage appeared 10,000 years after the events of Episode 2 and war off against each other.

The Oracles appeared in the anime series Duel Masters Victory V3 as antagonists. They are the second line of antagonists who are creatures themselves, the first being the "Diabolos" Line of Zeta creatures.

Other Oracle races include;

Oracles are named after various sources according to their civilizations;

There were originally 7 different ranks of Oracle creatures in the background story.

The 7th rank refers to Oracles that don't follow one of the above 6 ranks. 3 ranks were later introduced.

Oracles had differing abilities based on their nomenclature.

Creatures that evolve from Oracles 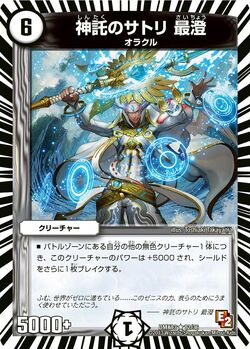