Onifuda Kingdom is a race of creature in the Darkness and Fire civilizations.

This race has an associated ability word, Onitime.

It is paired with Demonio and can appear on spells.

They tend to have words that are related to Japanese Oni demons, such as "Douji".

Many of their names also tend to be Japanese underworld-related.

There are currently no cards or evolution creatures that specify Onifuda Kingdom. 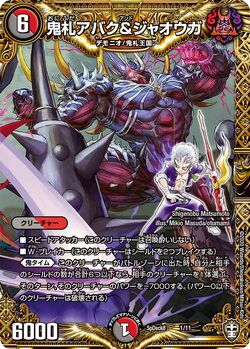